This imaginative app brings three creatures to life on your screen — tūī, jewelled gecko and tree weta. While they are locally extinct from Christchurch city, on nearby Banks Peninsula, trusts, landowners, community groups and organisations are all working to restore their habitat.

Imagine is a mobile application that through augmented reality, shows some endemic animal species of New Zealand. However, the project turns out to be interesting because the support of these representations are some posters created by a local artist (attached to the rest of images). These posters have been placed in the fences erected to hide reconstruction works of the city of Christchurch (New Zealand), hit by several earthquakes in 2011.

The application itself is simple, with an initial screen where you can access to the help (“About Imagine”) and to the 3 posters created which you can share (“Share”). The animals (tui, gecko and weta) are represented by illustrations. Each tab has a brief information, along with a series of recommendations about the most appropriate vegetation in order to create new favorable areas for these animals, also in the town. The application, which also has sounds, allows to interact with the various specimens by touching the screen of the mobile device. Each poster also includes a QR code that allows quick access to the application download. 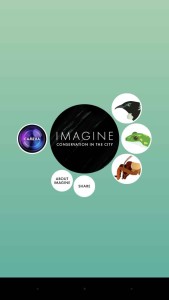 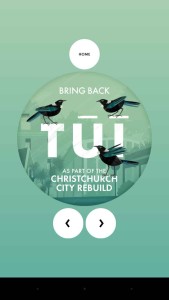 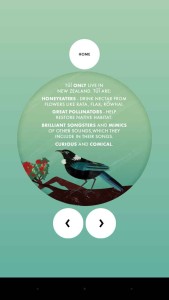 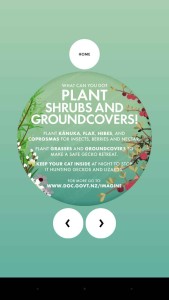 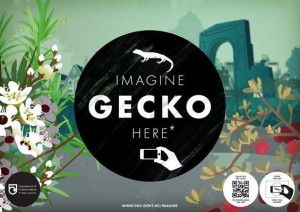 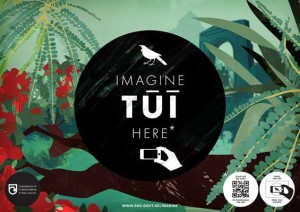 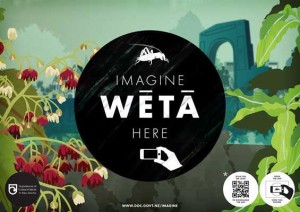 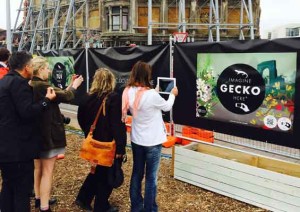 The earthquakes that hit the New Zealand city of Christchurch in February and June 2011 and the numerous aftershocks that extended throughout the year caused serious human and economic losses. In fact, according to an article published in the news website Stuff.co.nz in 2011, “Christchurch would be the construction capital of New Zealand for the next 10 years, but now it could probably safely be said to be for the next 15 years, due to the extent of the damage“.This rebuilding process has caused that numerous plots are fenced and these physical supports have served for the placement of these posters that have allowed to inform citizens of the city about its most emblematic animal species. While the application itself, which is also runs offline (to share the posters is needed Internet) does not provide too much information, the use of augmented reality is an original resource very attractive that can awaken the interest to know more on these species and assist in their recovery.As a curiosity, to comment that in this city has been also created another application that uses augmented reality to recover “virtually” some of the buildings destroyed by earthquakes.

Previous Post
Zookazam, the wild animals invade your mobile
Next Post
With Tigatrapp, the tiger mosquito will hate your phone