In this application you can consult information about the history, fauna, flora and excursions in the national parks. It also includes hundreds of points of interest such as information centres, accommodation, viewpoints, shelters, etc., with their location and contact information.

Runs offline: yes (it is necessary to download information previously)

National Parks of Spain is the new application for mobile devices designed by the Spanish National Geographic Institute. Its main objective is to make known the main characteristics and naturalistic values of these natural spaces. The first version of the app includes 4 Spanish national parks: Aigüestortes i Estany de Sant Maurici, Picos de Europa, Sierra de Guadarrama and Mount Teide.

All these spaces follow the same pattern regarding their sections. For this reason, the analysis will take as an example the Teide National Park, the most visited natural area of the network of national parks in Spain.

Once you have selected the national park, you have 4 sections:

Also, at the top of the application you have a menu that includes different sections, as well as the temperature and weather conditions at the user’s location: 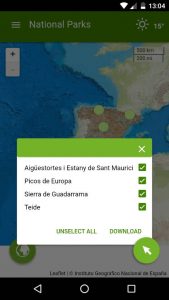 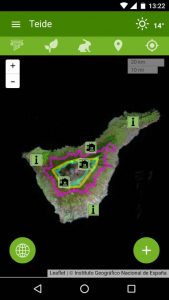 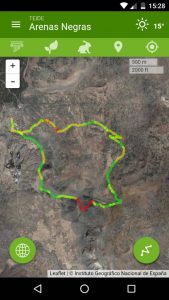 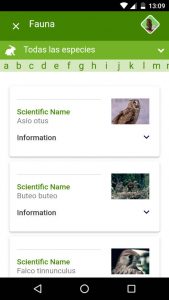 The video is recorded using the Android version of the application.

National Parks of Spain is an application for iOS and Android devices that allows you to discover the Spanish national parks through its flora and fauna, its routes or its history. The first version of the app includes 4 national parks: Teide, Sierra de Guadarrama, Picos de Europa and Aigüestortes i Estany de Sant Maurici

Spain is the European country with the largest area of protected natural territory. In the world, it is only surpassed by the United States and Russia. As Europa Press reported in November 2017, “20% of trips (in Spain) are associated with the nature component, generating an activity that is estimated at around 9,000 million euros, 11% of total tourist expenditure”, which shows the importance of tourism linked to the natural environment”. In the own conclusions of the Congress of National Parks and Sustainable Tourism held in November 2017 in Tenerife stressed the need to highlight these spaces, not only as sites with natural resources to protect, but as a driving force for the economic development of the surrounding areas.

One of the aspects that stood out in the mentioned congress was the new profile of the visitors of this type of natural areas, which is characterized by its high degree of technification. This evolution in the way visitors interact with natural spaces is something that Carmelo León, director of the UNESCO Chair in Tourism Planning and Sustainable Development, also stressed when he said that “technology can greatly improve the experience of visitors”.

Apps such as National Parks of Spain therefore represent an important advance. Although the IGN already had tools of this type, its functionality was not very good. With this new version, interesting aspects such as routes are introduced, also providing a detailed cartography. It is also interesting the possibility of downloading the information for use in offline areas, although it would be advisable to be able to download the different blocks separately, in addition to warning of their size. Also, it would be good to correct some data such as the MIDE valuation provided for the routes, as this section does not currently provide any value. It would also be interesting to speed up the loading of information for each park. The English version was rated lower because it is clear that the application was not designed with this language in mind. This is undoubtedly an aspect that should be corrected, especially given the number of foreign tourists who visit this type of natural area every year.

Previous Post
What can you do with used pallets?
Next Post
Analyze the product life cycle with Makersite

What can you do with used pallets?

1001 Pallets.com’s goal is to highlight your ideas made up from recycled, reused, upcycled or

Exoticas Murcia, a tool to curb the spread of introduced species