How much has the sea risen in recent years?

Polar Explorer is an education app. It educates the user about past, present and future sea level. Education is achieved by exploring maps and images created with real data

Runs offline: partially (the tiles are stored in the cache for temporary consultation)

The purpose of this application is to explain to users which factors influence in the changes that are occurring at the sea level and how these transformations have evolved over time. To decipher these keys, the application uses 4 levels of information: a text that introduces the topic and map; the audio file, that adds a bit more information; interactive maps, in which you can touch and get specific information related the active topic about any point; and an information button (i) located beside the slider and which offers expanded explanations and often, graphics. All the information included in the app is generated on real data.

Through the menu in the lower right corner, the user accesses the different issues that the application tries to explain, incorporating graphic material that supports textual explanations:

At the bottom of the menu, you have an option to configure the app, as well as a function to capture the screen. Also, in the lower left corner you have a slider to vary the opacity of the different layers of information. 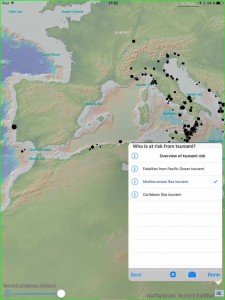 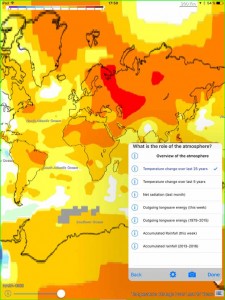 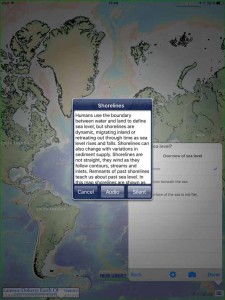 A Quest to Put Sea Level Rise Data in Your Pocket

The sea level rise is possibly one of the most obvious effects of the earth’s climate change, with some islands in the Pacific Ocean that have already disappeared under the water and several families that have had to be relocated. However, this phenomenon and the problem of climate change in general, carry the serious problem of not have been correctly transmitted to the laymen in the matter, often due to the complexity of the processes and the difficulty of making the data understandable.

Polar Explorer tries to remedy this lack of knowledge by using maps that make it easy to visualize the millions of data that are recorded every day on this subject. Although the content included in the app is interesting, sometimes it can be a little dense. In this sense, it might be useful to include some image in the text to observe the before and after. Also, it would be necessary to increase the size of the legends, since in some cases they are almost imperceptible and perhaps, to include an option to combine two layers of information at least, as if it were a GIS, being able to consult different aspects at the same time and observing how different elements can be interrelated.

Previous Post
Birds Check, how many birds are you able to identify?
Next Post
Reefill, the app that allows you to reduce plastic waste