iBiome Ocean, an app for children to discover marine biology

Build and explore diverse and intricate ocean habitats with Professor Bio as your guide. Revel in the simplistic beauty of the hand-drawn artwork and learn about real-world biological interactions and relationships

This application for iOS devices (the use of an iPad is recommended for a better user experience) teaches children between 7 and 12 years what marine ecosystems are and what relationships are established among the different organisms present in them. The aim is to incorporate, in each marine biome, marine organisms increasingly complex until arriving at a mature ecosystem.

The app starts with the presentation of Professor Bio, the character in charge of guiding the user through the different screens. The initial explanation allows contextualizing the application, showing the goal of the game and some of the problems that these habitats suffer, such as ocean pollution.

Each of these marine environments incorporates the animal and plant species specially adapted to the habitat they live in. In this way, the open sea ecosystem begins with diatoms and dinoflagellates, evolving and incorporating new organisms until reaching the large sea creatures.

The relationships between the different organisms can be visualized through the Crazy Web, a screen of the app in which you must identify the function of each organism to be able to see the symbiotic, parasitic or competitive relationships that are established. In this way, turf algae and seagrass are regarded as producers, while the octopus is a consumer. Also, as you progress through the game, you’ll see that you reach new levels as a player. 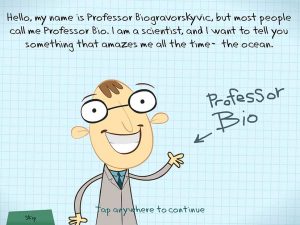 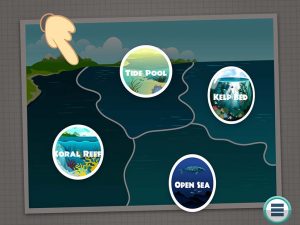 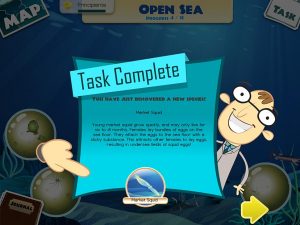 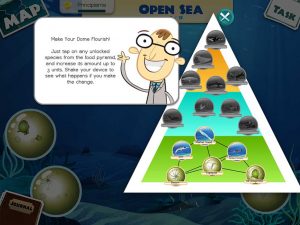 The oceans are still the great unknown of the planet. Despite the researchs carried out so far, its complexity continues surprising us. In fact, an international study has recently shown how ocean currents are transporting microplastics to the Arctic Ocean, a region considered hitherto free of a problem that affects virtually all seas. How to tackle this progressive degradation of the marine environment, an habitat that, in addition to providing food, plays a fundamental role in climate regulation and oxygen production? One of the most effective and inexpensive systems is, undoubtedly, education, that is, equipping the population with the necessary knowledge to know how the oceans work, the relationships that are established between the different organisms and the impact generated by the human activities.

This is the task that iBiome Ocean pursues: to provide children (or adults, as the design and content of the application are not exclusive) information to raise awareness about the need to protect marine ecosystems. This app can be considered as a continuation of iBiome Wetland, an application that has as scope of study the wetlands and their functioning. Like this one, Biome Ocean highlights for its careful design, incorporating new languages that improve the use of the application. However, it should be noted that once a language has been selected (through the device settings) and it starts to play with the app, it can not be changed without previously eliminating the progress achieved, ie there is no correlation between languages and the advances in the game. It should also be noted that, at least in Spanish, some words and resources, such as the links incorporated in the section for parents and teachers, are not translated, although it is not considered an aspect that reduces the quality of the game. Perhaps one of the problems that can be pointed out about this app is the excessive volume that it occupies, a detail to take into account depending on the device that is used.