OFFSET, demonstrating that you are able to control CO2 emissions

Take matters into your own hands and help cut back on carbon emissions to slow the pace of global warming. Part pong, part resource-management, and 100% retro, this game is challenging, exciting, and educational

OFFSET is an addictive game recommended from 4 years (classification asigned by the App Store) whose aim is to prevent the escape of CO2 emissions to the atmosphere that contribute to the global temperature increase.

To avoid it, you must control a horizontal paddle, like in the classic game Pong, that it will be used to curb the molecules of this gas. At the same time, you must ensure that you plant trees responsible for absorbing CO2, in addition to convert cars that circulate along the road in electric vehicles and replace the polluting factories by renewable energy plants to curb the generation of pollutants (you can only perform these actions when you have the necessary money and the signs of the amounts change from red to green).

The application has 5 options (the options “Instructions” and “Learn more” have been removed in the web version): 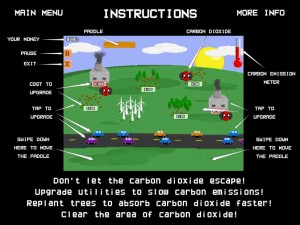 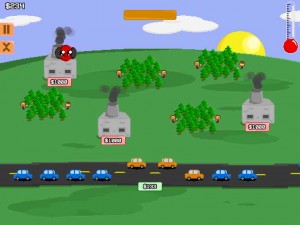 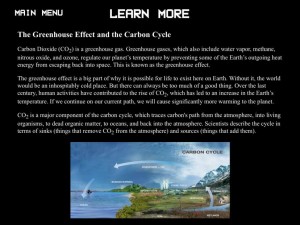 Recently, the World Meteorological Organization has launched the alarm about the concentration of CO2 in the atmosphere since it has found that the figure of 400 parts per million (ppm) remains stable globally, a trend that it has been steadily rising since this figure was exceeded for the first time in 2015. While it is true that this variable has been influenced by the El Niño phenomenon, its end has not meant a reduction in the concentration of CO2, a greenhouse gas that remains in the atmosphere for thousands years and is absorbed by the oceans contributing to its progressive acidification (in some countries, this phenomenon is becoming apparent through the impact on oysters and other shellfish).

Taking into account this scene, applications such as OFFSET become especially necessary since, in a pleasant way and based on a classic like Pong, introduces some of the aspects directly related to the generation of CO2 and the reduction of emissions in a game format. The application, originally designed for children (adults can also spend an enjoyable time with it), it is easy to handle (the web version sometimes jams a bit) and although the purpose of the game is not the competition itself, it would be nice to detail the score you get with each update of the facilities and vehicles displayed on screen.

Previous Post
Explore the Montseny Natural Park with its official app
Next Post
Record, compare and identify wild bird songs with this app