Eco Action Trumps, a card game to care for the planet

Eco Action Trumps takes its inspiration from the traditional top trumps game, where you pit your wits against your opponent to pick the highest value category on your card to ‘trump’ your opponent and take their card.

The Eco Action Trumps app is the digital version of a card game in which the person that obtains the most environmental benefit, according to the category into play, wins the “hand”. Each card distinguishes 5 categories: reduction of CO2 (measured in kg/year); energy saved (kWh/year); money saved if you perform that action (in pounds); resources, which refers to the number of elements on which this activity has an impact (energy saving, water saving, raw materials, land use, transportation, time and fossil fuels); and eco starts, a category that takes into account the investment in time and money which implies that action. The values are averages and only are used as reference.

The app starts with a small form through which you create an avatar. The current version includes the basic game with a series of cards that cover activities of daily life. In the physical edition of the game there are additional cards to purchase that include water saving actions, activities to develop in the office, actions as father/mother that can be used to share with the children and ways to save energy and promote recycling. Although also appear in the app, they are not currently available for its digital purchase.

The application includes two varieties of play: the traditional (play now – classic), in which you face a fictional character that you can select depending on the level of difficulty, and the option where you play with a set of 10 cards previously selected (play now – play your actions), playing against two fictitious opponents.

The gameplay is as follows:

Each card includes an explanation of what that action means (symbol “+” in the upper right corner), allowing select it to carry it out in real life when you consider that may be possible. Later, through the “Actions dashboard” menu option, you can see the options that you have selected to develop and you can see the savings that involve both in energy, water, raw materials, land/space, transport, time or fossil fuels. 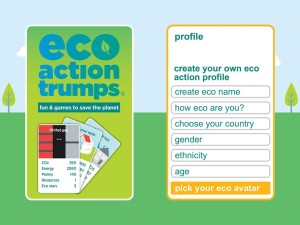 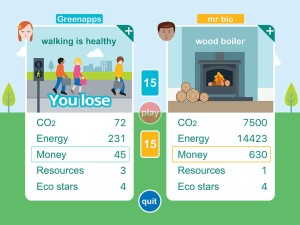 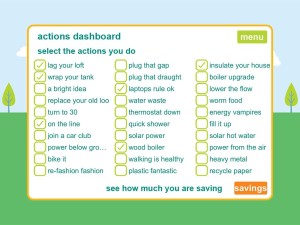 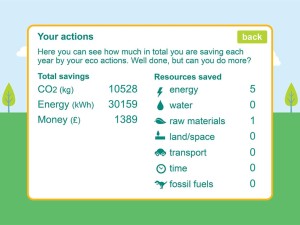 Yesterday started the 2015 Climate Conference in Paris. In this event, decisive in the opinion of many, the outlines of development for the coming years must be agreed, so that the temperature does not exceed 2°C, value that the scientists have established as limit. However, these measures will be ineffective if each one of us does not put something on their part with daily actions such as those proposed by this application.

Although initially Eco Action Trumps can be seen as a children’s game, really anyone can learn sustainable behavior through the application, since the concept of gamification around which is designed makes no distinctions of age. In fact, the implementation of some of the proposed actions should be carried out by adults. Regarding the application, the design is attractive and a bit addictive, but ultimately it can be a bit repetitive, given that the purchase of additional cards is blocked. However, as noted in Erica Bust’s article linked above and published in The Guardian, «your good eco intentions may help you win the game, but until they become real life actions they won’t make a difference».