After Ice, denouncing the global warming and its effects via selfie

After Ice is an application that mixes visual art with projection data on global warming. Its aim, in addition to showing the effect of polar ice caps melting, is to raise awareness about the problem of climate change. Thus, using augmented reality, Justin Brice Guariglia, its creator, superimposes the estimated height of water sheet for the user’s location.

To better appreciate the effect of antartic and arctic ice melt, it is recommended to focus the device on a nearby reference object. One of the alternatives is to take out a selfie and see how far the water will reach you (later you can share the image with the hashtag #AfterIce). The calculation of water height, in feet, is made taking into account the coordinates and information obtained from NASA and other official sources.

In this way, some areas of cities such as Bilbao (19 meters above sea level) would experience a flood of about 6 meters for the scenario 2080. 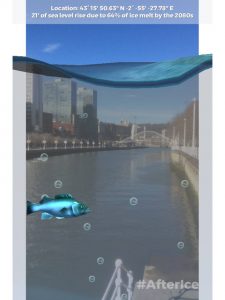 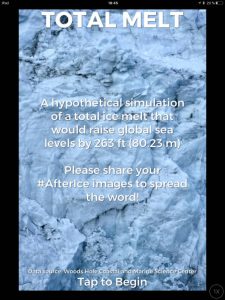 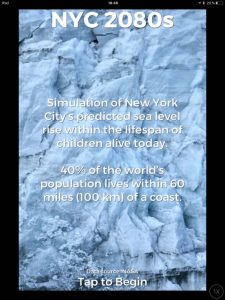 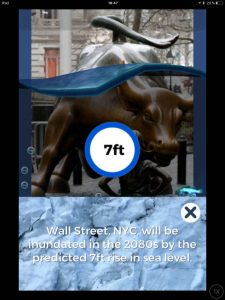 Also, although it is not related to After Ice, to find out which areas of your city could flood, you can consult one of the maps available in Climate Central or click on the following image.

After Ice: welcome to the new normal

2017 was the warmest year ever recorded without the El Niño phenomenon. But, what are the effects of rising temperatures in the Earth’s surface, oceans and atmosphere? In addition to the changes in animal migration patterns and phenological alterations occurring in plants, another consequence of the increase in temperature is the progressive melting of ice caps and glaciers that are causing sea level to rise gradually. In fact, in 2014, the World Meteorological Organization noted that this phenomenon averaged 3 millimeters per year worldwide, twice as much as it did in the twentieth century.

Although this issue is a concern, society is still not aware of the problem. The representation of global warming by After Ice may be a little simple, but it is based on official data from the New York City Panel on Climate Change and NASA, which gives it some truthfulness. However, the author himself warns that the data are not entirely accurate beyond those shown for New York City, due to the complexity of including the effects of tides or storms in the calculation. Despite these limitations, this application is an example of how technologies such as augmented reality can be used to bring scientific information closer to the general public.

Previous Post
Stop wasting food and save money with CogZum
Next Post
Aquation, learning how manage water resources while you play