Record, compare and identify wild bird songs with this app

Language: Spanish (some texts of the help remain in English)

Canto Aves ID is the version for Spain of a series of applications for birds identification (there are also applications for recognition of plants and trees) of the German company Sunbird Images (although this article analyzes the Spanish version, you can check if there is any specific app for your country in the Sunbird Images catalog). Its main objective is allow to identify the birds through their songs and claims, for which it has two alternatives: manual or automatic recognition.

The app has the following options (they are described according to the position they occupy in the screen of a tablet, location that may perhaps change in other devices): 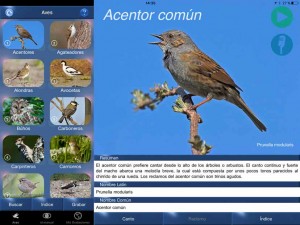 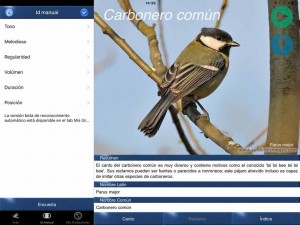 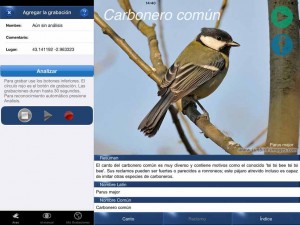 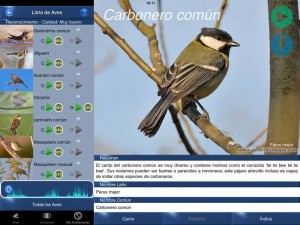 Although the following video is not of great quality, it serves to check the automatic identification process. For the test, it has been used the audio of a wren (Troglodytes troglodytes), identified in second place in the displayed list of possible species.

The development of software for identifying birds through their song is a field that offers many opportunities, although it is a technology that is still in its infancy. Although there are already projects that are investigating in these subjects (as, for example, Warblr or Chirpomatic), it is necessary to take into account the handicaps that involves this type of recognition. One of the main obstacles is to obtain a clean recording in which the song of the bird to be identified is easily distinguished. In this case, during the tests carried out with the app, there was an attempt to test its reliability in the field, but the weather made the task impossible. So to make the analysis, it was decided to reproduce the audio files that are incorporated in the app “Birds of Spain” from SEO BirdLife, although the staff of Canto Aves ID recommends not to use this type of audios since they may have been processed to improve their quality. Another problem that may arise, as Stephen Moss says in this interesting article published in The Guardian, are the different types of singing that alternate the birds, even the same individual, as well as the accents that register depending on the geographical area in which they live, which makes an Herculean task the implementation of recognition patterns in the different audio frequencies.

Canto Aves ID is no stranger to these problems. In the case of the audios used for the analysis, it has been verified, for example, that birds with low frequencies songs, such as pigeons, are not recognized by the program, operating a little better in those species with high frequency peaks, such as the blackbird or the dunnock. In the same way and regarding the audio files included in the app, some of them are of short duration (although they are executed in loop), not being able to appreciate the possible nuances of a bird song that can facilitate the recognition. The application also has an option to compare different species (the button “Índice” (Index) at the bottom right > “Comparar” (Compare)), although it has not been possible to find out the operation of this alternative. However, and despite the limitations of the app for automatic recognition, it can be useful for birds identification because includes numerous audio files and photographs on different species.

Previous Post
OFFSET, demonstrating that you are able to control CO2 emissions
Next Post
Look Up, looking for the sun that shines more