What will be tomorrow’s air quality?

Caliope mobile application allows viewing the air quality forecasting in Spain for the following hour after the consultation, in addition to the main air pollutants concentration maps for the next 12 hours on Iberian Peninsula.

Caliope is an application that predicts the air quality in Spain on the basis of data from monitoring stations spread across the territory and belonging to the autonomous regions, municipalities or AEMET (State Meteorological Agency). The system takes into account weather models, emission inventories, photochemical transport and transport of Saharan dust, providing results for each station classified in five categories (good, acceptable, deficient, poor and very poor) of the five most harmful air pollutants (O3, NO2, SO2, PM10 and PM2.5).

The application provides access to information in two ways: through the options on the initial screen or by the bottom bar that is displayed when you access any of the sections. The data included are the following:

The BSC has recently released a version of Calliope (Android / iOS) that provides information for the whole of Europe and which has a functioning similar to the app described in this analysis, although the number of monitoring stations included is lower. Also comment that the web offers more information than which reflects the application.

The update for Android made in December 2015 has introduced as improvements the possibility of consulting the Air Quality Index (AQI) on maps, also adding a small change in the interface, improving response times and increasing the number of stations available depending on the user’s location, which is now of 20 stations. 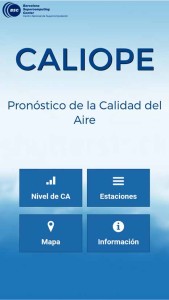 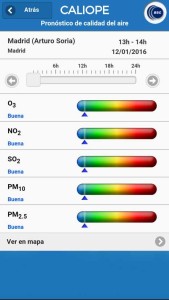 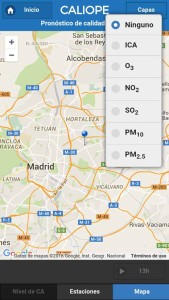 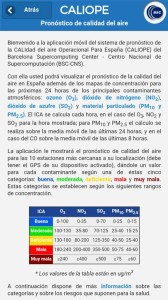 Images: Screenshots 12/01/2016. Images of the CALLIOPE system, operated by the Barcelona Supercomputing Center

As José María Baldasano, director of the Department of Earth Sciences of the BSC, explained in an article published on the web AppsLab in December 2013, «we believe there is a growing interest in meeting air quality of our cities and towns and we wanted to provide access to this information to citizens». This interest is increasing with the passage of time, since air pollution in urban areas is a problem far from diminishing. In this sense, more and more applications, portable devices and initiatives seek to provide information to citizens of cities, not only in order to inform, but also to increase environmental awareness.

Although the app Calliope doesn’t call attention by its design, it is effective in transmitting information. The app doesn’t offer pollution levels in real time, but the forecast is done with an hour early, which allows to organize the various activities depending of pollution and the physical condition of the user. It also has in its favor the large number of monitoring stations of which takes data, covering most of the country. Regarding the difference with pollution data offering by AQICN network, the BSC team says that the information provided by it has a global view. AQICN feeds on non-specific sources of information already available that do not take into account the Iberian peninsula atmospheric conditions, and, therefore, the system Caliope is more accurate.