With Animal Tracker, you can follow the movements of wild animals all over the world that are being tracked in near-real time. These movements are collected by tiny GPS tags carried by the animals and are stored at Movebank, a free online infrastructure used by hundreds of researchers to manage, share, analyze, and archive animal movement data.

Website of the developer: Max Planck Institute for Ornithology

Animal Tracker is an application for mobile devices that helps users follow traces of wildlife and collaborate with the scientific community taking photographs of specimens that have been fitted with a GPS device (for now are included 17 species). The aim of the images is to provide information about animal behavior. Although GPS provides information about its location, it’s good to add graphic documentation to these data to show if the animal is in the company of other congeners, what it eats, etc.

As mentioned previously, the data included in the application are taken from the Movebank database. As soon as the investigator receives location data via email or SMS, these informations can be automatically transferred to the corresponding project in the mentioned database. Most of the species included in the application are birds, although they have recently included black flying foxes (Pteropus alecto).

The options of the app, accessible from a menu on the upper left (next to the symbol of the planet, used to zoom to the whole map) are the following:

It’s important to note that when you click on each point indicated on the map, it unfolds a small datasheet with the name of the animal, species, date of last activity, and the data of movements recorded in the last two weeks and in the last year.There is also options to select the animal as favorite, learn more about it or add an observation. 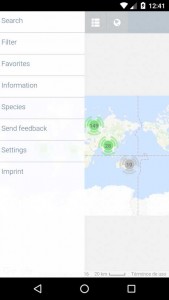 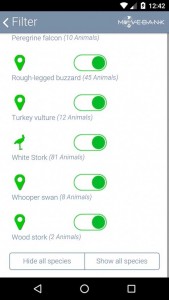 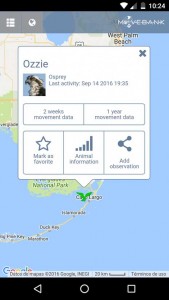 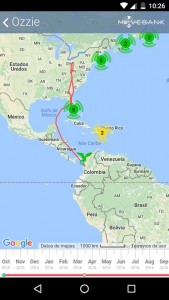 The climate change and the alterations that humans are introducing in the ecosystems are modifying the behavior of animals. For example, it calls the attention the change that are experiencing species such as the greylag goose (Anser anser), which is modifying their wintering trends, or the white storks (Ciconia ciconia), many of which do not already migrate to Africa in winter, remaining throughout the year around landfills, where they have found a continuous food supply.

Animal Tracker allows to observe these changes in natural behavior, also serving as a tool to monitor the success of reintroduction programs of species, as in the case of Waldrapp project to introduce the northern bald ibis (Geronticus eremita) in Europe again. Furthermore, it’s certainly interesting to watch the travels of thousands of kilometers carried out by some birds (as an example, the image attached of the annual trip between the state of Ohio and Colombia of the osprey named Ozzie). Perhaps the theme of collaborating with the scientific community is a bit more complicated, since to carry out effective observations, it is desirable to have tools such as binoculars or telescopes to facilitate identification of tagged animals, and telephoto lenses that allow to obtain pictures with some definition, material not within the reach of all persons.