The air pollution of London in an app

The CityAir app will alert you on days when pollution is forecast to be high and give you tailored advice on simple actions you can take to reduce your emissions and exposure to air pollution.

Website of the developer: King’s College London and City of London Corporation

CityAir is an application that shows the levels of air pollution of London, one of the most polluted European cities. The application consists of three parts:

The application also allows you to search by name, define a route and see to what levels of pollution you are going to be subjected during the journey and review information on bus, bike, taxi, etc. as well as current levels of contamination of all gases and the annual nitrogen dioxide levels. A recent update has improved this option to define the best route.

Also, from the “Home” option and clicking on “Settings” (iOS) or the gearwheel at the upper right (Android), you can point out to what group you belong (pedestrian, runner, cyclist, driver, business or individual risk) in order to receive notifications when pollution levels are dangerous. 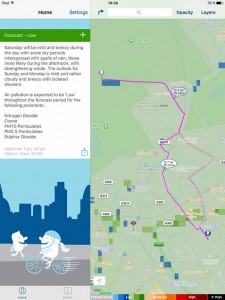 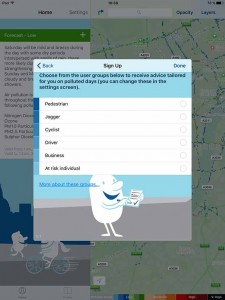 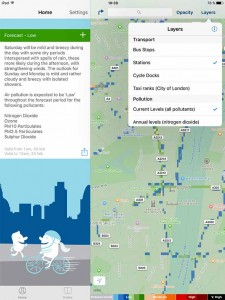 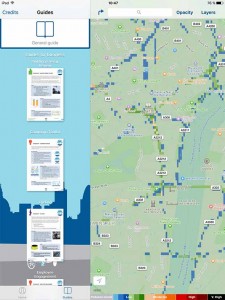 In 1952, London suffered one of the most remembered severe pollution episode, which has gone down in history as the “Great Smog of 1952“. Although it is not clear how many people died as a result of this phenomenon (there is disagreement over this figure), several thousand were accounted for. Currently, London experiences serious pollution episodes, causing only in this city nearly 9,500 premature deaths annually.

For this reason, the municipal government of London has launched an ambitious plan for measuring the air quality, finding in mobile applications such as CityAir the perfect complement to keep citizens informed. Although at the time of writing this analysis, the web application and the Android version didn’t work properly, the iOS version allowed to interact with the app. Although it’s a very simple tool, it is particularly interesting the combination with the option of calculating route, so you can view the level of pollution of an area in order to avoid it. Similarly, it’s also interesting the use that the City of London in collaboration with King’s College are making of Twitter as a communication tool with accounts as @CityAir or @LondonAirNow.