Alert about environmental problems with SIGNALERT

SIGNALERT is the application of information exchange where users can warn and monitor the impact of natural disasters or actions caused by man, the effects of climate change and the crisis of which we are witnesses or victims.

Price: free (there is a paid version for €2/year)

SIGNALERT is a collaborative mapping tool that allows you to warn on environmental crises, riots or other problems that endanger human lives or the integrity of the natural environment.

It has two versions, free and paid, in addition to a web platform designed especially to serve as a support and to display the alerts that agencies, NGOs, etc., can contract (cost depends on the surface of territory to cover and the number of events over which you want to receive alerts).

To use the application, you must first open a user account by assigning an email and a name, data that are not visible to other users, as indicated in the terms of use. However, from the settings option you can make visible your username on Twitter or Facebook, so that other users can identify you through these social networks.

The available options (for this analysis has been used the demo of app’s free version) are the following: 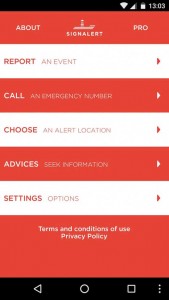 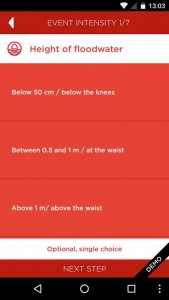 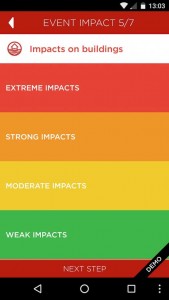 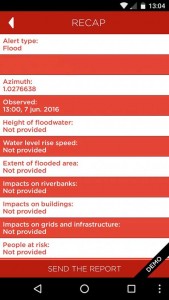 The consequences of extreme natural phenomena or human-induced violent acts pose annually substantial economic and human losses. This is certainly a worrying scenario that possibly will get worse in the future as a result of climate change, as several authors predict, among which it can mention Bill McGuire, professor of geophysical and climate hazards at University College London, who claims that global warming will enhance the effect of volcanoes or earthquakes.

New technologies can be useful since a rapid intervention derived from an early warning can minimize damage. SIGNALERT is within these utilities, allowing users to report the severity and impact of phenomena of which are witnessing. It is a useful tool with interesting options like the button “I’m fine” (paid version), similar to the one that Facebook activates when disasters occur. Also, and as confirmed by the team of SIGNALERT, they have plans to add more events such as episodes of pollution. Perhaps the fact of relying on Internet for its full operation can be a handicap, since telephone and internet communications tend to be affected by such disasters, although also it is one of the infrastructures that more rapid is restored.

Previous Post
Anthos, an app to fill your mobile of plants
Next Post
Know the air quality of your street with Breezometer

CrowdWater, technology and crowdsourcing to take care of our rivers

This project is about hydrology, specifically water level, runoff and soil moisture. The project investigates