The app of the Natural Park of the Ruidera Lagoons (also known as Ruidera lakes or Lagunas de Ruidera in Spanish) is a pioneer in the natural parks of Castile-La Mancha. With two main innovations: the use of audio guides and georeferencing, it will help you in a simple way to improve your visit to the natural park.

Runs offline: partially (the consultation of the tabs about information, natural park and Don Quixote require an internet connection)

Lagunas de Ruidera (Ruidera lakes / Ruidera lagoons) is the official app of the natural park of the same name, a protected space located in the border between the provinces of Ciudad Real and Albacete (Spain). This app is offered by the Government of the Autonomous Community of Castile-La-Mancha and it allows to plan the visit to the park, incorporating for it different audiovisual materials and maps.

The app includes the following options: 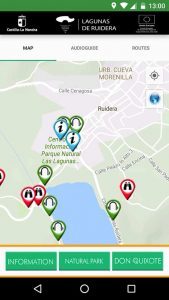 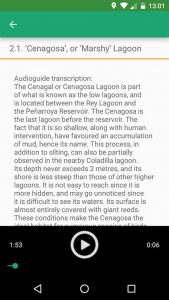 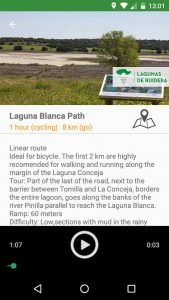 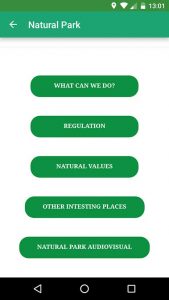 2017 has been declared by the UN as International Year of Sustainable Tourism, an activity in which nature has a leading role. In this sense, Spain has an incredible wealth represented by one of the largest biodiversities of Europe, with many natural areas along the country. This translates to an enormous potential to exploit this resource from the point of view of sustainable tourism, allowing to diversify the tourist destinations and reducing the pressure on coastal zones. However, in addition to promoting these natural spaces in tourism fairs and events such as Fitur, it is necessary to create useful tools to satisfy the needs of tourists. Mobile applications such as this or other similars like NaturCuenca can be an interesting communication resource to provide not only information, but also the knowledge necessary to value the natural areas, thus contributing to an increase in the awareness and protection of spaces.

The app of Lagunas de Ruidera highlights for its ease of use and the content, quite complete, that incorporates. It is worth mentioning the effort made to translate most of the content into English, although in this regard it would be necessary to add a menu that allows to change the language, since this option only appears when the application is first loaded. As other aspects to improve, it would be advisable to avoid the automatic reproduction of the audios, leaving the user to choose this option manually. After all, one of the first rules to be observed during a visit to a natural area is to avoid discomfort to wildlife and other visitors, a behavior that implies keeping a proper tone of voice or avoiding a loud music volume. Equally, it would also be interesting to include the park boundary on the map.