Report illegal wildlife trafficking in Asia through an app

The illegal wildlife trade can happen anywhere and law enforcement need a mobile tool to identify animals and respond to crime. WildScan provides that tool. With a comprehensive species database and contacts registry, WildScan supports enforcement officers combating wildlife trafficking. WildScan is a mobile Species Identification and Response Application developed for ASEAN-WEN by Freeland with support from the U.S. Agency for International Development.

Wildscan is an application for Android devices aimed to facilitate the work of customs agents, police, members of conservation organisations and general public in the fight against illegal wildlife trafficking. Its scope is limited to Southeast Asia countries (Brunei, Myanmar, Cambodia, Vietnam, Thailand, East Timor, Singapore, Philippines, Malaysia, Laos and Indonesia), although one of the latest update also includes the ability to report cases of illegal traffic for countries in Africa and Latin America.

It has the following features:

The first access to the application requires an internet connection to synchronize the database and verify the user through a Google account. The application also features with a help and information section accessible from the top right that provides advice on how to use this tool, treatment of seized animals, etc.

The latest updates have improved application performance and language support 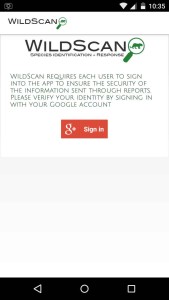 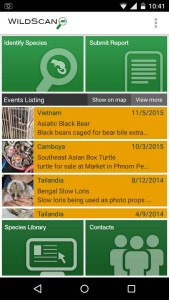 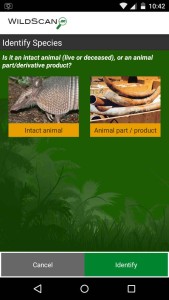 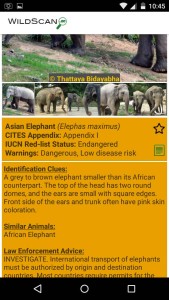 Illegal wildlife trafficking is a serious problem that affects several regions of the planet. in March 2014, Neville Ash, Chief of Biodiversity and Ecosystem Services Branch, and Biodiversity Unit of UNEP claimed that “In South and Central America and across Asia and elsewhere, the illegal trade in wildlife – of birds, fish, mammals, reptiles and plants, to satisfy domestic and international markets is also taking its toll on biodiversity, resulting in the loss of natural capital, and providing financial gain for organized criminal networks.“. And it is that terrorist organizations in the world have also been involved in the illegal trafficking of species due to the huge profits generated by this activity (however, there are some opinions that call into question these facts, such as Diogo Verissimo, from Georgia State University).

Despite these differences of opinion, it is clear that tools as WildScan, which facilitate the work of the authorities and allow to denounce these illegal practices, are very useful and help to complete a task that in many parts of the world can be dangerous. This application, despite its size, stands out for its agility, its adaptation to the languages of the scope (this test only has confirmed its operation in Vietnamese) and its contents, although some species have a poor photographic documentation that may hinder identification (in some cases, there are also repeated photographs). Likewise, it would be desirable that the user had more logging options, for example, with an email and a password, because there are people who don’t have a Google account, limiting the possible use of the tool. It would also be useful to ensure a mechanism in the treatment of data that provides a high degree of anonymity to avoid reprisals.