Welcome to ClairCity Skylines, a unique policy-making strategy game where you are the mayor, you make the rules, and only you have the power to unlock a successful clean-air future for your city

ClairCity is a game in which you assume the role of mayor of a polluted city. Your task will be to adopt the best solutions to avoid or at least reduce air pollution. However, it is not as easy as it seems. If you don’t want to finish the game quickly, you’ll need to balance 4 indicators:

The application is part of a European project that seeks to engage people in the management of the city and raise their awareness to adopt a more sustainable behavior. Six European cities take part in the initiative:

Although currently you can only play with Amsterdam and Bristol, the idea is to recreate the atmosphere of all the cities mentioned. Each scenario is built based on local problems. In other words, its design has been based on real data, looking for specific solutions for each city. In this way, citizens can see how the adoption of one solution or another affects the management of the city.

Information provided by the app

You do not need a user profile or account to play. All transmitted data, such as small surveys that the app will show you, are anonymous.

As you move around the city, you must click on the different key buildings you will find (the bank, the hospital, the park, etc.) and collect the proposals put forward by citizens. Among them you can find, for example:

Each one of them shows the affected indicators. When you arrive at the town hall, you will be able to consult them in more detail and approve those you like the most, taking care to balance the different variables. As the game progresses, you will be able to check the degree of fulfillment of each decision thanks to the reports that you will receive.

The game ends when the time space defined for the actions taken is reached or when one of the variables drops to zero. 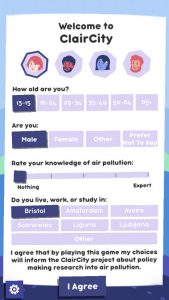 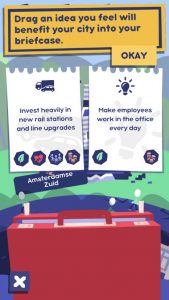 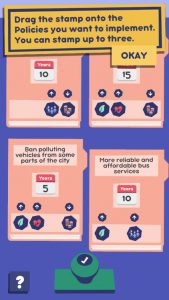 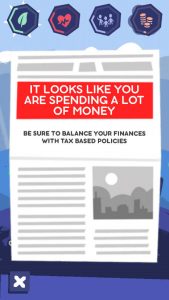 The video is recorded using the Android version of the application (4 min 41 sec).

One of the main challenges facing cities, especially cities involved in projects related to smart cities, is, to a certain extent, the disconnect between governments and citizens. Many cities do not have effective communication plans and tools to publicise their actions and allow the opinion of their citizens to be known. But the successful development of a city requires the participation of all its agents (government, citizens, companies, NGOs, etc.), as was shown in wemakethe.city. This event, held in Amsterdam in June 2018, exposed the different ways of co-creating the city, being one of the key factors pointed out the need to involve citizens in municipal policies.

This co-creation is precisely one of the goals pursued by the ClairCity project. Focused on finding ways to prevent air pollution in participating cities, the ClairCity initiative relies on dynamics such as workshops, surveys, talks in schools, conferences, etc., being one of the tools used the analysed app. This innovative form of engagement makes it possible, on the one hand, to demonstrate the impact of pollution on health and, on the other, to analyse what kind of decisions people make to solve the pollution problem and, in the process, to combat climate change. The application stands out positively for its care and attractive design, adopting a fun video game format. However, and as aspects to be improved, some problems have been detected in its functioning (occasionally, the indicators were not loaded and people’s suggestions could not be seen). It is also necessary to briefly contextualize the problem of each city. It would also be good to extend the years of operation or reduce the speed at which they run, as the game becomes a little short.

Previous Post
Quit Meat, reduce your impact by shifting to a vegetarian or vegan lifestyle
Next Post
Tap, the app that refills your water bottle