Plume Air Report, the air pollution in your phone

Plume Air Report is a free mobile application that provides its users with timely, accurate, and actionable information on live and predictive air pollution levels in their city.

Plume Labs is a Parisian company that has developed an application to know the air pollution of cities around the world (the new air pollution map includes numerous cities, although the accuracy of these results is unknown. The data are taken, among other sources, of the Atmosphere Monitoring Service provided by Copernicus Project). The methodology developed combines artificial intelligence and machine learning, technologies on which have created Plume Air Cloud, a platform that collects, aggregates, normalizes, and predicts air pollution levels.

The system collects more than half a million data points every day from more than 11,000 Iive air pollutant monitoring stations. The implementation of all the functions is being made gradually, so in some cities the app only provides information on air pollution with a delay of 2-3 hours, while in metropolis like Paris or London, where the artificial intelligence system is developed, the data are displayed in real time, also providing a forecast of the pollution. This predictive system in cities like Paris, highlights for its accuracy, doubling the successes with regard to traditional forecasting methods.

Regarding the screen, at the top and on a blue background, the icons of the different sections of the app are represented. The little cloud (Plume Labs logo) is the access to the main screen where data from air pollution are showed and the figure of the head is the information section. From this tab, you also can access to the camara utility, allowing you to take a picture of the city with information about air quality superimposed

The section that provides information about contamination shows a graphical alert about these levels through a series of pictographs represented by a cloud. Sliding the finger from right to left over this symbol, you access to a numerical translation of this representation. This number is part of an index based on the guidelines of the World Health Organization (WHO) and the Environmental Protection Agency (EPA) of United States. The major pollutants also are shown (NO2, O3, PM, etc.). It also includes temperature, information on ultraviolet radiation (UV index), expressed as a numerical value from 0 (low) to 11 (extreme), date and time

At the top there are 3 icons on each side of the name of the city: historical pollution (one touch, index of last week and two touches, the history of the last months), option to share on social networks and configuration, where you can select the city of interest.

At the bottom, a set of symbols referred to outdoors activities which can be developed without risk according to the degree of contamination is shown. These actions, in addition to the level of sensitivity to pollution, the notifications and the units, can be customized in the settings tab.

Recently they’ve added a geolocation system (valid only in the cities included in the application) and in June 2016 they are going to test a personal sensor in the streets of London.

The application is also available for Apple Watch. 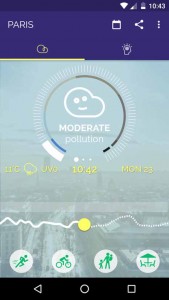 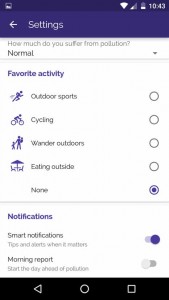 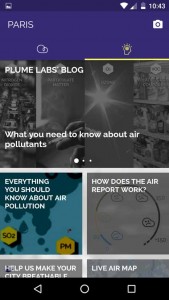 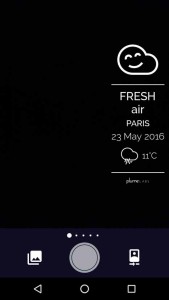 A recent study of the Max Planck Institute in Germany has shown that air pollution causes more deaths than malaria and AIDS combined, over 3 million people a year. These data, however, contrast with those published in March 2014 by WHO, which increased the number to 7 million. Beyond the numbers, it is an environmental problem associated mainly to urban areas that possibly will increase in the future as the world’s population continue to growing and more people move to metropolitan areas (some studies estimate that by 2030, almost 60% of the world population will live in cities). Also it should be noted that climate change increases pollution episodes, increasing their harmful effects.

One of the first steps to tackle this problem is information. Apps as Plume Air Report help to fill this lack. The application, in addition to its utility, highlights by its design, extremely attractive. The graphical representation used is very intuitive, easy to understand.

Regarding possible improvements could be interesting include a cartographic representation that shows the most polluted areas of the city in order to avoid them taking alternative routes. One of the latest updates has significantly improved the system of elimination/change of cities once selected, enabling “Set as my city” to other cities that you’ve added later. Obviously, there are missing many cities (by the way, if you want to propose any metropolis for next updates, you can do it filling this form or from the app itself, in the “Help us make your city breatheable” section) and the ideal would be that all areas would have the system of prediction active, but is to be expected that the tool follow evolving, so it will necessary to be aware of upcoming versions.

One thought on “Plume Air Report, the air pollution in your phone”