GLOBE Observer invites you to make observations about the Earth around you. Observations you collect and submit with this app are used by scientists to validate, interpret, and understand satellite data collected by NASA from space

GLOBE Observer is an application to record Earth observations that complement the information used in Earth science projects. Its methodology is based on citizen science. It is a tool integrated in NASA’s GLOBE program, an initiative originally designed as a worldwide science and education program that already had an application, GLOBE Data Entry, aimed at supporting the educational community. NASA, however, has been proposed expanding the scope of this data collection project with this new app that tries to reach other groups of people interested in collaborating by sending their Earth observations.

To use this application it is necessary to open a user account. It is only necessary to provide a valid email, to which is sent a password that allows access to app. It should be noted that the use of this tool implies the permission to publish the images provided to NASA and GLOBE, so sending photographs that contain identifiable persons, children or inappropriate elements is prohibited.

To record the clouds, in addition to the date, time and coordinates of the observation point, you must answer the questions that the application will ask you. Thus, you must specify if sky is clear or covered, its color, visibility or surface conditions (if there is ice or snow, water, mud, etc.). You can also upload images.

Data can be sent instantly or saved (and edited or deleted) on the device. 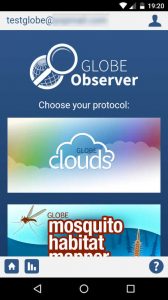 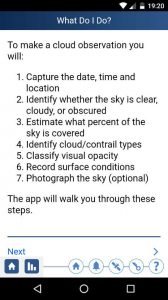 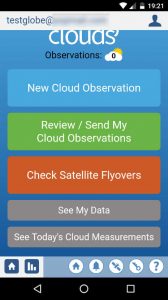 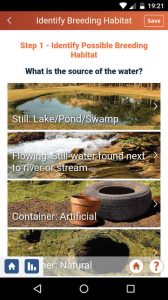 In previous articles of this web has already been mentioned the importance of data collected through the citizen science, being the base on which are supported projects such as Mosquito Alert or Natusfera. Although in some cases the information collected in this way may generate certain doubts regarding its validity, it is also true that they are aspects of easy solution that are solved with training or the existence of a team of content curators or reviewers. Likewise, this type of initiative implies the promotion of public participation and a greater immersion capacity of society in scientific subjects.

In the case of GLOBE Observer, the project focuses on the observation of clouds and the location and elimination of mosquito breeding areas. The explanations are better than in the Spanish version of the app, reason why this analysis receives a rating a bit higher. However, in the case of mosquito habitat mapper, although identification of larvae is an optional task and is fairly well documented, it is somewhat difficult for the uninitiated, both by the necessary equipment and for the multiple details that it is necessary to bear in mind about the anatomy of the larvae.

Previous Post
ArboLove and ARboles+, two apps to promote the care of urban forests
Next Post
Reduce food waste with the help of CogZum