Receive and share information on invasive species with this app

This app is developed by the Joint Research Centre, the in-house science service of the European Commission. Its aim is to enable the general public (amateurs and professionals) to receive and share information about Invasive Alien Species (IAS) in Europe

Runs offline: partially (to consult the map or the links a connection is necessary)

Website of the developer: Intrasoft International for the European Comission Joint Research Centre

Invasive Alien Species in Europe is an application that aims to inform the public about the problem of the spread of non native species, allowing, through citizen science, to report on the presence of these introduced species.

If you want to collaborate by providing your comments, you must register as a user through EU Login, similarly to the case of the Natura 2000 Network app, a requirement that can also be completed from the app itself through Login or register tab.

The other options included in the application are:

In the upper right corner there is also another menu from which you can consult aspects related to data protection, terms of use, regulations in relation to IEEs, etc. 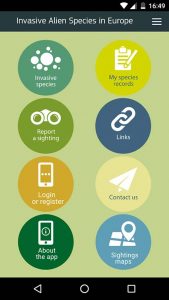 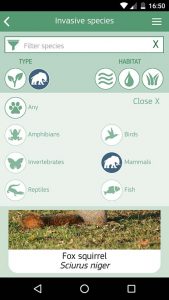 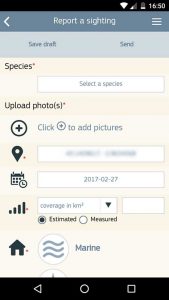 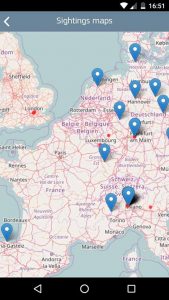 New application for tracking invasive alien species with your smartphone

As the previously linked EASIN website includes, exotic species can be defined as «non-native organisms that become established in a new environment». Although most of them offer no risk, some species end up displacing native varieties, endangering crops, infrastructures or other properties and causing damages that in the case of Europe are estimated at around € 12 billion per year. This problem has also been addressed previously on this website through the analysis of applications similar to Invasive Alien Species in Europe.

In the case of the present tool, the fact sheets of the different species stand out for their utility, since in addition to the image gallery, they incorporate useful data that facilitate the identification task, and the form, which is very simple to complete. However, it is notorious that this is an application still under development, since some exotic species widely spread across the continent, such as the pampas grass (Cortaderia selloana), cape fig (Carpobrotus edulis) or zebra mussel (Dreissena polymorpha), a mollusk that causes serious problems when colonizing different types of infrastructures such as water pipes, are missing. Also during the tests performed, small problems were detected in the reading of the maps and the data included therein (observations do not incorporate the name of species), possibly due to the above fact that they are still Implementing the verification system.