FenoDato looks for nature lovers who want to learn to make phenological observations and help scientists to study the impacts of climate change on plants and animals.

FenoDato is a citizen science tool designed to enable users to register the nature’s adaptation to the different seasonal cycles and variations that climate change is introducing about these. This task is performed based on the phenology, science that studies the life cycle of living beings and their interaction with the seasons and weather changes.

The system created to enable this collaboration is based on the use of Twitter, social network through which the observations on the various stages of bloom or the sightings of a series of species selected as markers are shared. These species are olive, black locust, poppy, cherry, almond, holm oak, swallow, apple tree, Aleppo pine, peach tree, Spanish broom and rosemary.

The application has the following options, some of which link with the website itself:

The application also incorporates a game about identification of species through photographs. It can be accessed from the icon that represents a leaf on the top of the home screen. 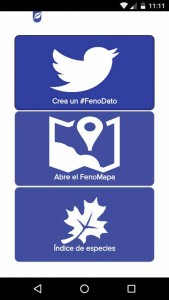 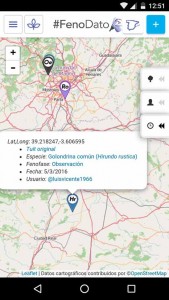 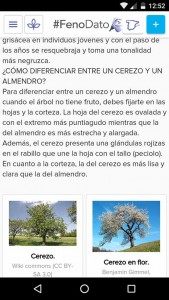 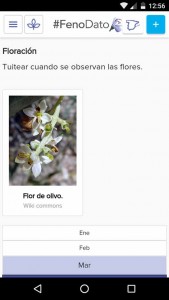 As the effects of climate change increase, nature tends to adapt to the new pace, altering its usual life cycle. It is no longer unusual to see trees in bloom in winter or migratory species that each time return before (or no longer migrate). This situation is not only of natural environment, as it also affects agriculture. Thus, for example, it’s evident the change that growing seasons of crops are experiencing in some areas of Scotland. This adaptation is related to the evolution of the species. Although the term “evolution” usually implies a long period of time, the speed with which the changes occur is making that some animals such as the tawny owl accelerate its adaptation (the plumage has changed its color as snowfalls were lower)..

The registration of these changes is, therefore, essential to understand the effects that climate change is causing on biodiversity. However, and as the web of FenoDato remembers, these observations cannot be automated, so the cooperation of citizens is very important. In this regard, highlighting the use that FenoDato makes of a network such as Twitter, using this platform as a means to share observations and map them. However, it would be interesting to also allow the communication of sightings through forms or other channels with the aim of involving other volunteers who do not use Twitter. The fact that it’s necessary an Internet connection to send the tweet can also be an obstacle, because in some areas the connection still remains limited. Therefore, it would be useful to design a “collect data” option with subsequent synchronization. It also recommended a more visible access to the game because it goes a little unnoticed.