Marine Debris Tracker is an app to track and log marine debris items from a list of common debris items found on the beach or in the water.

Marine Debris Tracker is an initiative of the University of Georgia (US) to promote the remove of marine litter from oceans and coastal areas. The main objective of the application is not so much to have meticulous records of the removal of marine debris as to educate people about this environmental problem. In this way, each user or group of users can perform a periodic analysis of the litter found in a specific beach. Data can be shared with other users of Marine Debris Tracking or downloaded in CSV format for statistical analysis.

The app is very simple. The collection of data about marine litter and beaches is done by selecting a list from the “Change list” command that is displayed when you enter in the application. At the time of writing this article, 9 lists are active, each with a separate database to which to add your findings. For example, there is a group in Spanish focused on recording the waste collected on the coasts of Latin America or another list in which you can add parts of ships which are located at sea or at the beaches. According to the selected group, the list of most common wastes is loaded , being the default inventory the one created by NOAA (NOAA Marine Debris Shoreline Survey Field Guide). The only thing that the user has to do in this section is to take note of the number of objects found in each category to send them later to the selected database. This submission can be done in two ways: as a registered user of the application (the register can be performed from this screen) or anonymously, with the possibility, cited above, to download the data in csv format. If you register, your username will appear in a list with the number of items collected that you have reported. 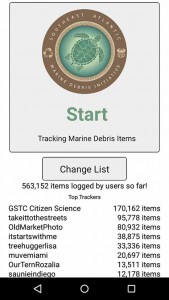 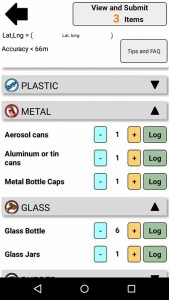 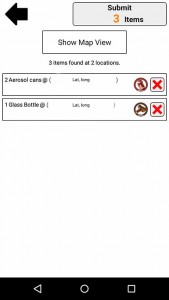 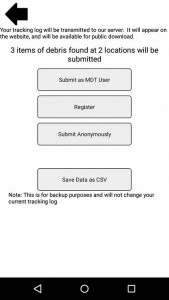 The enormous amount of marine litter that circulates through the oceans is one of the major environmental problems that humanity is facing today. For example, Project Aware recently shared an infographic in which explained that plastic causes 13 billion dollars/year in environmental damage to marine ecosystems and almost 400 marine species have ingested or become entangled by this type of elements. Likewise, numerous studies suggest that wastes also serve as a vehicle for the spread of invasive species, as it has demonstrated with the debris of the tsunami that hit the coast of Japan in 2011, having found Asian species in California.

In this sense, it is obvious that some of these wastes have their origin and destination on the shore, so the campaigns to clean beaches are very important. In these tasks and in order to take some control or perform statistical analysis, apps such as Marine Debris Tracker (or others analysed in this web such as Marnoba or Marine LitterWatch) are useful. One of the main advantages that has Marine Debris Tracker is the large number of users scattered worldwide who collaborate with the initiative. Generally, is a simple application that can be used offline (the databases are synchronized when connected to the internet). However, images that facilitate the identification of the waste are missing, although a recent update enables to upload your own photos. Similarly, it would be interesting to have a registration form in the website to make this step easier.