Know the Urdaibai Biosphere Reserve with this app

The application try to be a guide to publicize, to anyone who wants to enjoy of the Upper Oka Estuary, the important natural and cultural heritage concentrated around him.

Oka Urdaibai is an application to publicize the main heritage and natural resources of the Upper Oka Estuary, enclave included in the Urdaibai Biosphere Reserve. The application is divided into 4 sections: 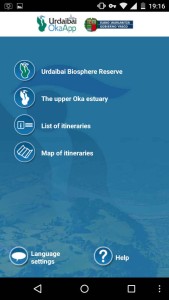 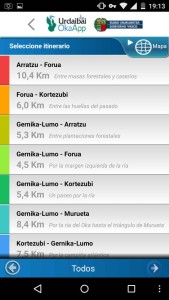 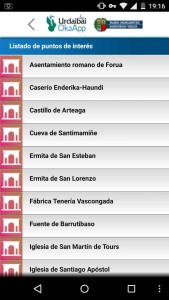 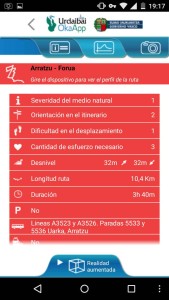 The Urdaibai Biosphere Reserve, that also host three enclaves classified as Special Areas of Conservation (SAC) and a Special Protection Area (SPA) and is also included in the Ramsar List of Wetlands, is one of the major natural enclaves of the coast of Biscay. Among its main values, are remarkable the formations of Cantabrian oak and oak groves, besides its rich fauna, especially represented by numerous migratory birds and wintering species. The relevance of the area has become a tourist attraction, so a mobile application like this was a necessary . However, the review carried out for the Android version has detected several shortcomings/problems that is recommended solve for future versions if the aim is convert this app in a resource useful and attractive.One of the main problems is that the current version is basically a functional copy for smartphone of Adobe Flash version that shows the restoration project which can be downloaded from the website of the Basque Government (see link in “More information”, Only in Spanish and Basque). This source generates certain difficulties since, for example, is not the same display information on a computer that in a mobile device (screen size, reflections, etc.). In this way, is lacking a general map of the natural area that allows the user to locate oneself. It is also imperative fix encoding problems in the Spanish version, as well as the links to videos in the “Video Library” (at the date of the analysis the download is broken). There is also some information, such as describing some characteristics of the project, which are almost unintelligible in phones with small screen because if you zoom, the image appears pixelated. It is also surprising the low importance that it has been given to the wildlife values of the area. With respect to the information included in the itineraries, this is correct, although it would be necessary to include a legend about the symbols used in the technical description. It is also interesting note if the route is adapted for persons with physical disabilities or not.On the positive side, point the possibility of obtaining information via augmented reality. Although it has not been proved its functioning because this analysis is not performed in Urdaibai, the mere inclusion is a factor to consider, especially considering the many uses that offers this technology to increase knowledge and promote interaction with natural areas.