Throwing garbage away properly has a reward with WasteApp

Website of the developer: Technological Centre for Innovation in Communications (IDeTIC-ULPGC)

WasteApp is an application that, through gamification, seeks to raise awareness about the correct disposal of inorganic and organic waste by users. Its creation is part of the European URBAN-WASTE project, an initiative to promote sustainability in the generation of waste from tourist destinations.

Its operation is based on the interaction of tourists and inhabitants with the QR codes installed in waste containers and the social networks. In return, users accumulate points that they can redeem for prizes at partner entities.

First of all, you need to register as a user with a nickname and password. During the procedure, you can fill in a short anonymous questionnaire for statistical purposes (age, gender, duration of the visit, etc.). The only mandatory field to select is the participating city you are in. This requirement is due to the specific strategy that each city has established in relation to waste management, which implies that the information collected is analysed locally.

The application has 8 options represented by icons:

Users have two ways to get points: thanks to QR codes attached to containers or by interacting on social networks with a hashtag. In the first case, the points are only added when the reading is done in the established timetable for waste disposal. Reading QR codes can only be done twice a day. In the case of interaction with social networks, you can accumulate points by tweeting with #UrbanWasteUE, also twice a day. 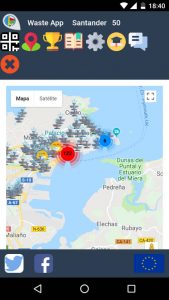 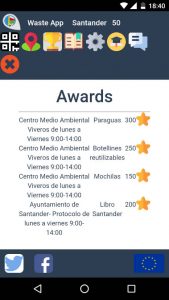 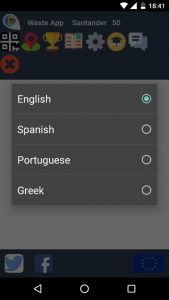 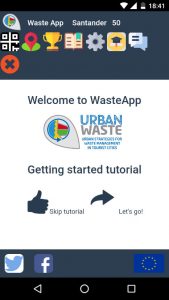 The video is recorded using the Android version of the application.

Waste management in tourist destinations creates a serious problem. Infrastructures and services for this purpose are sized for a more or less stable contingent of people and are often unable to meet the needs of a multiplying population during the holiday season. This situation often leads to an accumulation of waste, which invade sidewalks and attract rodents and insects. In addition, this waste can be washed away by rain to the sea. But it should also be pointed out that part of the problem is generated by the uncivil behaviour of some tourists and inhabitants of these cities, who do not throw waste in the established schedules, making it difficult to clean the streets and the normal functioning of the services.

WasteApp aims to alleviate this situation through gamification, rewarding civic behavior through redeemable points for prizes and discounts. Although the idea is a good one, it is clear that it requires the commitment of citizens. There is no mechanism to prevent getting points at the same time you do not separate waste properly or you throw them into the containers at times other than the fixed hours. The operation of the app is simple (perhaps it would be interesting to include in the tutorial some image of the QR codes so that users can easily identify them), although there are some aspects that should be improved, such as navigation on the map. Thus, for example, the legend displayed in the tutorial is blocked and cannot be viewed in its entirety. It would also be interesting to improve the interaction mechanism between the user and the available social networks. In the case of Twitter, for example, it has been found that the simple fact of loading the hashtag #UrbanWasteUE from the application allows to get points, not even needing to publish the tweet. So and to avoid an incorrect use of the app, it might be interesting to consider valid only the tweets sent from the cities included in the project (the user should activate the option of geolocation in the Twitter account) or to count only those actually published.

Previous Post
Exoticas Murcia, a tool to curb the spread of introduced species
Next Post
What can you do with used pallets?