Reduce the effects of natural calamities with this game

Help Smithsonville and other cities predict and prepare for natural disasters. Use tools to make predictions and save the city from damage by helping citizens prepare properly

Disaster Detector is an entertaining game that bears some resemblance to programs such as SimCity. The aim, however, is to teach «players how to analyze and interpret data on natural hazards to forecast future catastrophic events and how to implement tools to mitigate the effects of those disasters». For example, in the case of tornado-prone urban areas, the shelters will provide safety for residents. And all this, of course, without neglecting the level of satisfaction and the money available for infrastructures.

In the game you have to deal with 4 types of natural catastrophes:

As prediction tools you can consult the readings of an anemometer, thermometer, barometer and seismometer. For each of these variables you can also consult the corresponding historical data. A Doppler radar is also available to check for storms near the city. Occasionally, you will receive notices from citizens who predict the occurrence of possible events. It’s up to you to listen to them or not. 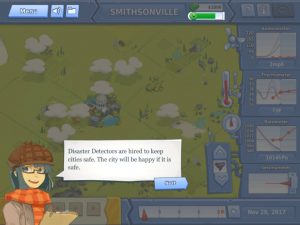 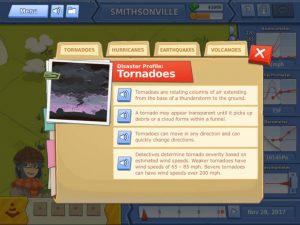 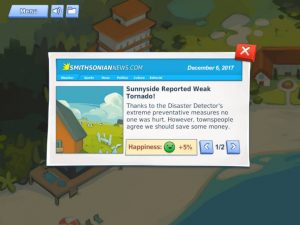 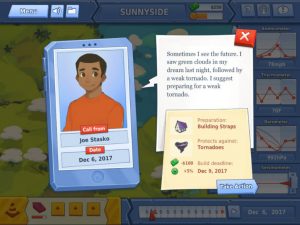 Although the number of natural disasters “has quadrupled to 400 per year since 1970,” the number of deaths from these natural phenomena is decreasing across the globe, as a recent article showed in The Economist. This is a verifiable fact reflected in numerous statistics. Although these representations are cold and inexpressive insofar as the value of a human life is incalculable, they reflect a dynamic resulting from the improvement of defence mechanisms (construction codes, improvement of infrastructures, etc.) and monitoring systems against natural disasters.

Some of these prevention measures aimed at minimizing the impact of natural disasters are included in Disaster Detector, an educational game for schoolchildren aged 11 and over recognized by the American Association of School Librarians (AASL) as one of the best apps in the field of science, technology, engineering and mathematics. The application stands out for its design, attractive and with a remarkable playability that ends up engaging the user. Besides showing some effective solutions to reduce the consequences of these phenomena, he also explains them briefly, offering curiosities or striking aspects that are easy to remember. The application offers a complete tutorial that facilitates the comprehension of the game. It should also be noted that from the application’s website there is the possibility of downloading a Flash file (*. swf) with which it is supposedly possible to play on a desktop computer. However and after several attempts, it has not been possible to execute it. As areas for improvement, it would be interesting to include other phenomena such as floods, which also cause serious damage to populations and the economy and whose impact will also be altered as a result of climate change.

Previous Post
Do you want to improve your access to atmospheric pollution information?
Next Post
Find out the impact of your trip with this carbon footprint calculator