The impact of CO2 emissions in a graphic

Website of the developer: University of Southampton / NERC / EPSRC

CO2Modeller is an interactive tool which enables anyone to explore the impact of CO2 emissions, allowing to define different scenarios and visually projecting the carbon concentration in the atmosphere, the increase of global temperatures, the rise of sea levels and ocean acidification.

The application displays the gigatons of carbon per year for a period of time between 1990 and 2100, plotting the projected carbon emissions under a business-as-usual scenario through a dotted line. From this screen, the user can interact as follows (clicking and dragging):

Once defined the scenario based on the above parameters, the application internally runs 1000 independent simulations calculated from 1765 to 2100 and displays the results for the 4 parameters considered (press on the corresponding icons): CO2 concentration in ppm, average warming in °C, increase of sea level in meters and pH of the oceans.

The graph represents the median projection by a solid line, while the shaded green area shows the variations in the different models taken into consideration. 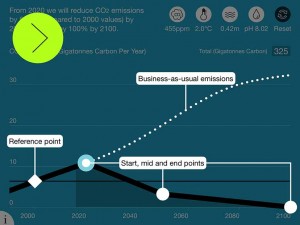 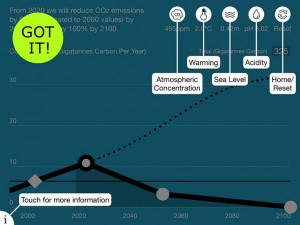 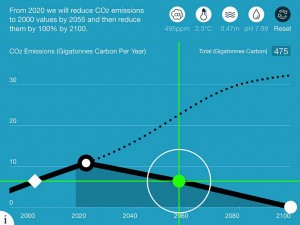 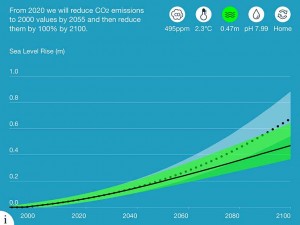 The last April 22, 2016, over 150 countries ratified the Paris Agreement on climate change reached at the end of 2015 in the French capital. Although this document does not establish percentage targets in the global reduction in emissions, the agreement advocates «holding the increase in the global average temperature to well below 2 °C above preindustrial levels and pursuing efforts to limit the temperature increase to 1.5 °C above preindustrial levels», unachievable goal without a reduction in carbon emissions.

In order not to exceed the average temperature, each country defines a set of commitments that manifest themselves in the framework of the Intended Nationally Determined Contributions (INDCs). Thus on the basis of reduction commitments that each state is acquiring (EU28, for example, has presented a reduction target of at least 40% by 2030 compared to 1990 emissions), CO2Modeller users can see the effects that these initiatives will have on aspects that takes into account the application. It is particularly interesting the data about the pH of the oceans, since it is a parameter that directly affects important economic sectors such as fishing or aquaculture, but, however, does not occupy as many headlines as the increase of temperature or the sea level. Although the application may be easy to use and the resulting graphics are quite clear, simpler explanations for people with less knowledge in modelling climate change scenarios are missing. Perhaps, in this sense, the projections to explain the effects of climate change that may work best are those made over maps, such as the web tool Coastal Risk Australia.