GrowApp allows you to make animations of trees, gardens and landscapes by taking pictures with your smartphone. The app directly transforms these pictures in a time lapse movie that shows changes over the seasons and even over the years.

The main objective of GrowApp is the study of the phenology, scientific discipline already described in the analysis of the Fenodato app. This app can be considered as innovative because, through images and time lapses, allows to record the life cycle of plants throughout the seasons. Both the photos and videos you create are geolocated on a map that loads when you start the application.

The application includes the following options in its version for mobile devices, accessible from the side menu:

Users of the app have two possibilities to contribute with new content anonymously (options only available for mobile versions):

Also and in order to homogenize the observations, a particular attention is being paid to six tree species: oak, hazel, beech, birch, sour cherry and small-leaved linden. 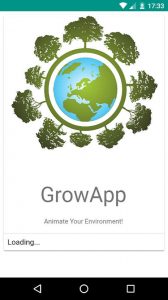 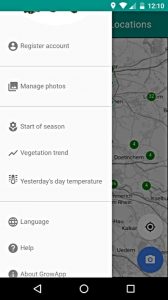 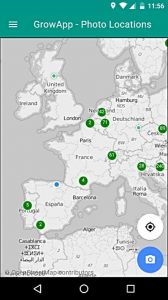 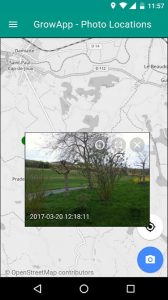 With regard to the web version, this includes as utility the possibility of establishing filters to facilitate the search of videos and specific images and labels. This web version is recommended for the search of the different multimedia resources.

GrowApp: make an animation of climate change in your backyard

The phenology, as a science responsible for studying the response of nature to the seasons, is a perfect indicator to assess the impact of climate change. As GrowApp’s own team explains in its press release, since 1982, «the flowering of 17 spring plants in Europe, for example, advanced with two weeks on average» as a result of the increase in temperature in Europe (1.5 ° C with respect to the pre-industrial levels), which can be interpreted as an unequivocal sign of the change that is taking place.

In this sense and although the information on the greenness compiled by space satellites is very important, it is still necessary to complement these observations with field data, activity in which the citizen science and applications like GrowApp take a special meaning allowing to share the locally changes in the flowering process. The automatic creation of the time lapses also supposes an interesting resource that allows to visualize in a simple way the pass of the seasons of the year and that it could be of special value for children in school age (in fact, one of the aims of the project is to involve children in research activities about climate change). However, it is missing a way to download or share these videos in social networks, a possibility that could help spread the message about global temperature increase. Also, it would be interesting that the mobile version also incorporated a small search engine, at least to allow filter out images from videos, as well as a more detailed explanation of some of the layers of information included.

Previous Post
Play with Wild Warriors to save the most endangered animals
Next Post
SPE, an app to promote environmental sustainability in housing