Exoticas Murcia, a tool to curb the spread of introduced species

The aim of this tool is to encourage collaboration and citizen participation in the detection of exotic plants and fauna species, especially those with a strong invasive character, raising awareness about their environmental impact, so that eradication and control programs can finally be implemented

Runs offline: partially (a connection is needed to carry out the sync and see the web map)

Exoticas Murcia is an app to register exotic plants and animals with invasive capacities that threaten this Mediterranean region. Among these are, for example, Fallopia baldschuanica, a species of the same genus that japanese knotweed, or the monk parakeet (see photo at the top). Created within the framework of the LIFE RIPISILVANATURA project, its objective is to know the location of these specimens in order to execute the measures that prevent the propagation of alien species, in addition to raise awareness.

First, you must register as a user via email. Once you have registered, in the start menu you will find the following sections (indicated with a * the required fields):

Also, from the home screen, you can access an information section that reminds you that the app has been created in the framework of the LIFE RIPISILVANATURA project.

Screenshots are from the Android version. 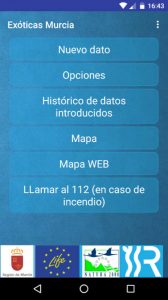 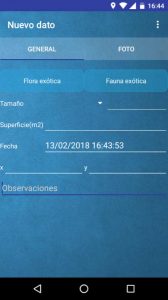 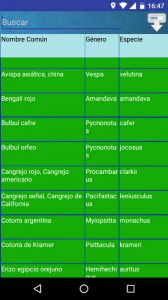 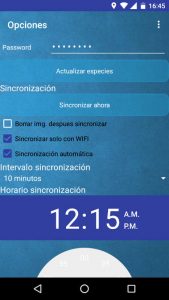 The video is recorded using the Android version of the app.

Invasive alien species have a high cost, not only on biodiversity, but also in the public purse. Thus, according to a publication of the European Union in 2012, «IAS […] cause serious economic damage to agriculture, forestry and fisheries, which is estimated to be at least EUR 12 billion per year in Europe alone». To cite an specific example, the fight against zebra mussels in the Great Lakes region in US has an annual costs higher to $250 million. But the cost of the surveillance and inspection required to control the propagation of these species is prohibitive for public administrations. For this reason, initiatives such as Exoticas Murcia, which is based on citizen science as a way of involving people in biodiversity conservation, are extremely useful.

Exoticas Murcia stands out for its simplicity of handling, having given priority to this characteristic over design. It also includes some quite useful features such as the possibility of programming synchronization or deleting images once uploaded to the server. In terms of aspects with room for improvement, although the different sightings are reviewed by experts, there is a lack of manuals or photographs to help identify the species. It would also be advisable to include a section about personal data protection policies such as email, especially bearing in mind the new European directive on data protection, which will start to apply from May 2018.

Previous Post
Aquation, learning how manage water resources while you play
Next Post
Throwing garbage away properly has a reward with WasteApp