iRain, contribute to the science by reporting local rainfalls

iRain provides access to real-time global high-resolution (~4km) satellite precipitation products from the PERSIANN-CCS (Precipitation Estimation from Remotely Sensed Information using the Artificial Neural Networks – Cloud Classification System), which has been developed by the research team at CHRS. […] Users can also use the crowdsourcing functionality of the app to report their local rainfall information to supplement our data.

iRain is an application whose new version was launched coinciding with the COP22 of Marrakech held between the days 7-18 November of 2016. This tool allows the consultation of the estimated rainfalls based on infrared satellite images that are processed and subjected to pattern recognition techniques, being able to verify the behavior of the clouds from 72 hours to 3 hours before (the images have an approximate delay of 1 hour). Moreover, taking into account that information is available for virtually all countries free of charge (according to the images shown in the different versions, it seems that there is no data for the northernmost areas of Europe and Canada), it can be used to prepare bulletins on flood risk and drought, just as they do in Namibia (according to a recent conference held in China, it appears that the administration of this African country has been using data from the G-WADI system, also from CHRS, although it is understood that, little by little, they will implement the new PERSIANN CSS system, which is the one used by iRain and it is more advanced).

The web application is somewhat more complete than its mobile version, enabling, for example, the delimitation of polygons to request rainfall information or seeing an animation of the evolution of the clouds, but in essence, both versions are quite similar.

The mobile application includes 4 icons in the bottom (from left to right):

There are a couple of options to perform a search by name or consult the help at the top of the application. 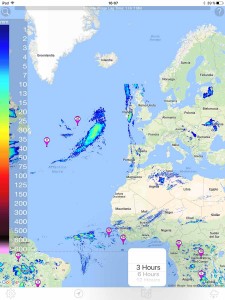 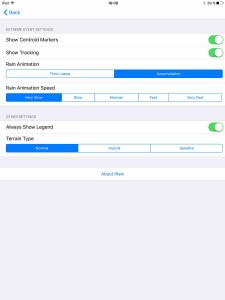 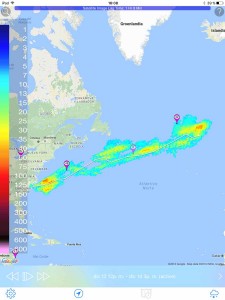 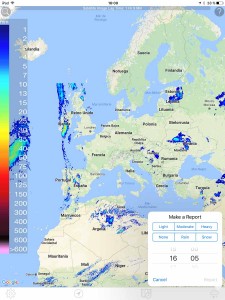 The modifications in rainfall regimes that climate change entails, according to the scientific community, make that tools like iRain are useful for monitoring emergencies, especially in countries that do not have an alert infrastructure, thus minimizing possible human and economic losses. Although for the consultation of the meteorological forecast there are numerous tools (one of the most interesting is, for example, Dark Sky, which is quite accurate, although its mobile apps only work for the moment in US, UK and Ireland), iRain introduces as a novelty the possibility of reporting on local precipitation, complementing in this way the results from satellites and making citizens become an active part of the system through crowdsourcing.

Regarding possible improvements, a more detailed tutorial than the one available in the app itself or in the pdf created by Unesco (see section of “More information”) is missing, since information about extreme events is scarce (what determines its classification as such, for example). It would also be interesting to include hail as a form of precipitation in reports made by citizens. Likewise, it is recommended to include some type of notification for users through which it guarantee that location is the only personal data that is stored (a software license or EULA, for example).

Previous Post
Your information searches now have double reward with Elliot For Water
Next Post
Natura 2000 network, closer than you think