Do you like to sunbathe on beaches with litter?

The MARNOBA Platform aims to collect, store and display information in a simple way about marine debris on our shores using a mobile application (App MARNOBA) for free download and available for iOS and Android systems.

Runs offline: partially (the version 3.4 for Android devices allows its offline use, but a connection is needed to “read” the images of waste and enable their storage in the cache and to send the forms)

The app Marnoba aims to characterize the residues found on our shores, trying to educate the users of these areas about the problems that cause the beaches with litter.

The application starts with a screen on which an email address and a user name is entered. These data are used to identify you as collaborator of the project. In the last screen of the app you can specify if you wish that your name appears on the website. Any transfer of personal information is made pursuant to the legislation about data protection applicable in Spain, something that the user of the application must specifically approve (acceptance of the conditions of use).

Once completed this first step, the application lets you select between three fields of action: beaches, diving or trawlers, thus covering an area stretching from the beaches to the seabeds of the Spanish coast.

The waste characterization is done through a series of targeted forms very similar. The methodology is as follows:

After filling the different forms, information is sent to the Asociacion Vertidos Cero. The data are standardized and can be used in the implementation of the Framework Directive on Marine Strategy, Law on Protection of the Marine Environment, regional conventions ratified by Spain or other studies. 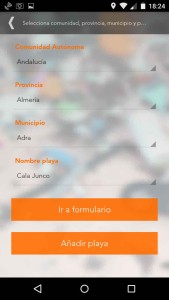 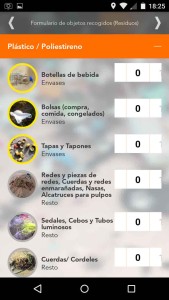 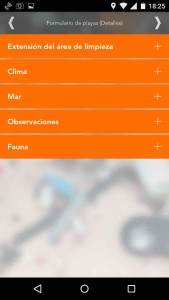 A few weeks ago, several websites echoed a video in which a team of scientists removed a straw from the nose of a turtle, showing the suffering of the animal. Similarly, and also recently, a whale approached to a recreational craft in Australia “calling for help” because it had a plastic bag in its mouth. The proliferation of waste at sea is one of the major environmental problems that we face as a society. Many of these wastes end up on the beaches, where are added to the litter that many inconsiderate users throw in the sand after their stay, converting many of our beaches into real dumps of all sorts of items.The development of applications as Marnoba serves to streamline the inspection, characterization and waste collection in coastal areas, replacing paper forms. While it is an app which can be used individually, the most effectiveness is achieved through regular campaigns organized by various groups that monitor the procedure and the correct filling of forms. The application itself is easy to handle, it is quite intuitive and light. However, there is a lack of information about whether the data collected are after validated by technical experts. Also is recommended the incorporation of a warning system through which users know cleanup initiatives that will be developed in the vicinity to their places of residence or summer resort. The website has a section where the campaigns are reported, but it would be interesting to implement these activities in the app. It could also be useful enlarged images to identify the residues easily because in devices with small screens is a little tricky to distinguish them clearly, especially when taking into account the problems of display (reflections for example) that still offer the screens of mobile devices in outdoor areas.