Project Splatter is a citizen science project led by Cardiff University (UK), which is operating since 2013 and ends in 2017. Its aim is to collect data and map the wildlife roadkills on UK roads to identify hotspots, see which species are most affected, increase the awareness about this issue and take measures to minimize this problem (for example, wildlife crossings).

Although notifications can be send to the responsible team via Twitter, Facebook, email or a form included in the web, one of the tools available is a mobile application that allows to collect data easily.

The app has a brief form (accessible from the home screen using the “+” sign) in which the following data is requested (some fields are displayed as different variables are filling):

Once you have completed the form, it is saved and sent to the server. If the information does not rise immediately, every 24 hours the app will remember that there are sightings pending to send (a notification with the initials PS can appear). Until dispatch, the forms can be edited or deleted. From the home screen you can access to these forms through an icon representing some stacked trays. The icon located on its right leads to the map with the sightings made by other volunteers, as long as you have installed the complementary application. 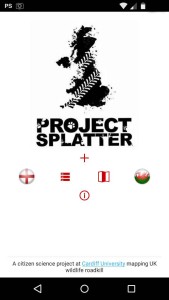 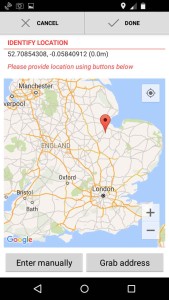 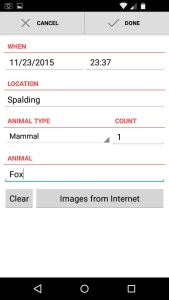 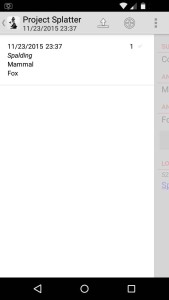 When this project was presented in 2013, the then Farming Minister, David Heath, said that “badgers have no natural predator, except possibly the motor car“. Although it is not a completely true statement, since certain carnivores or birds of prey can attack badgers, especially juveniles, it offers a glimpse of the serious problem that involve the wildlife roadkills. For example, it is estimated that a million of animals are killed daily in USA, as reflects the project’s website. In the case of Spain, it is estimated that every year there are between 15,000 and 20,000 accidents as a result of wildlife in the roads, being involved endangered species such as the Iberian lynx (22 deaths in 2014).

Therefore, the identification of hotspots through projects such as this in which citizens are the main collaborators are very effective to adopt measures to correct deficiencies. In this regard, it should be mentioned the use that this initiative makes of social networks as communication and notification channels. Regarding application, it is very simple to use, although it is a bit strange that does not allow to include photographs of the dead animals, because they can occasionally serve for a proper identification.

Previous Post
Discover what the biodiversity is with this app
Next Post
Eco Action Trumps, a card game to care for the planet