Arbolapp, a tree guide in your smartphone

Application to know the trees of Iberian Peninsula, available on iOS and Android platforms

Arbolapp has become its own merits in a successful tree guide in mobile application format, which until now has more than 100,000 downloads for Android devices. It serves to identify wild trees growing in the peninsula, including native trees and some feral species. Thus, may be found non-native species such as the Monterrey pine (P. radiata), native from California, or eucalyptus (E. globulus), from Australia.

The information available for the different species is presented in the form of data sheets with different photographs, descriptions, distribution, ecology and curious aspects which are grouped under “More Information” section. Identification can be done in two ways: guided, pointing tree characteristics (shape and arrangement of leaves, for example), or open, browsing through the different sections or topics that contemplates the app (distribution, leaves, fruits and related, flowers or other). One of its main features is that it works offline, which is an advantage since it allows use in offline places.

Tha last updated in March 2016 has added more species, photographs and illustrations, allowing the option to zoom on images to better appreciate the details and including new keys (for example, the color and appearance of the bark, the presence of latex or aroma) in order to facilitate identification.

It should also be noted that since March 2017 the version of Arbolapp specific to the Canary Islands is available (Android, iOS and web). 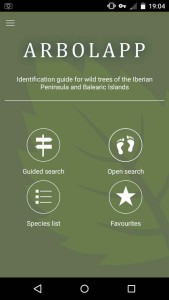 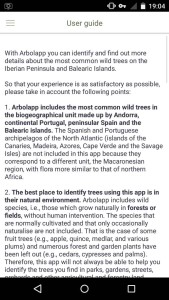 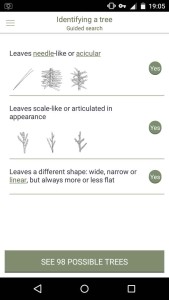 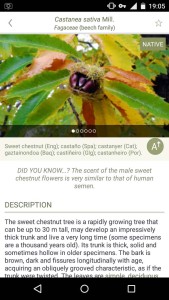 Arbolapp is a useful application that allows identify the trees of the Iberian Peninsula. Certainly and as some users have expressed in the Android platform, a tool like this was needed to make public the different species that characterize the peninsular landscape. In addition, the latest update has introduced interesting aspects such as identification through the bark thus allowing to identify deciduous trees during the fall and winter months or the launch of a web version that facilitates its use, for example in the schools.

Being an application that updates thanks to governmental grants and aid, the pace of improvement is not always as agile as many users would like. Given these circumstances and in relation to the many criticisms it has received the application for not include the species of the Canary Islands (in the download page of Android can read some), should be note, as well is included in the application itself (see second image or access from Menu-About Arbolapp-User guide) that these species have not been included because “ correspond to a different unit, the Macaronesian region, with flora more similar to that of northern Africa“. That is, the Canary Islands would need a specific and own Arbolapp, which has come to light in March 2017.