Vespa Velutina is an application designed for the management of beehives and beekeeping farms which includes as functionality a system of warnings for the location and tracking of specimens or nests of Asian hornet (its scientific name is Vespa velutina. Not to be confused with the Asian giant hornet – Vespa mandarinia – and its subspecies Japanese giant hornet – Vespa mandarinia japonica – or the European hornet – Vespa crabro). This invasive species of wasp is spreading rapidly throughout Europe, endangering the continuity of bee colonies, whom it attacks and kill.

When you start the application, a central menu is loaded. The displayed options also are accessible from another side menu and from the quick access icons at the top. These functionality are as follows:

From the side menu, besides the above options, you can access the video tutorials of the application, the help or the weather forecast. 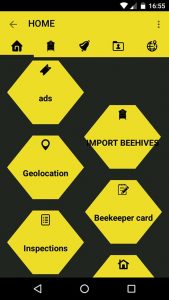 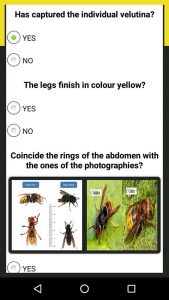 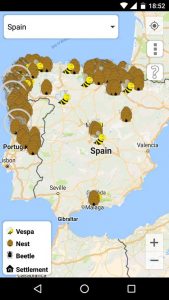 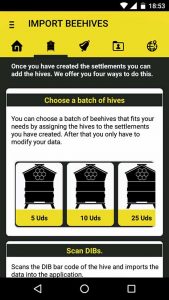 It is believed that the first Asian hornets arrived to the port of Bordeaux in a container from China in 2004. Since that year, this invasive species has been spreading its territory through many European countries, causing serious damages in the bee farms of France, Spain or Portugal. Last year the first Asian hornet specimens were detected in the UK.

The Vespa Velutina app contributes to the task of curbing the spread of this insect allowing to help through citizen science in finding nests or scattered specimens, also including clues on how to identify the Asian hornet. Also, the application allows to ensure the traceability in beekeeping farms. Although in general terms it is a useful application, it still has room for improvement, especially in the design part. In this regard, it might be useful to distinguish more clearly the beehive management part from the warnings section, with a striking call to action to facilitate the record of warnings. The inclusion of two virtually identical menus in addition to quick access icons, as well as the need to login by entering the email and password every time you enter the app (users who sign up via Facebook do not have this problem), can generate a bad user experience using the app. It would also be interesting to include in the app a small explanation about why the inclusion of the beetle Aethina tumida as object of study.

Previous Post
SPE, an app to promote environmental sustainability in housing
Next Post
iBiome Ocean, an app for children to discover marine biology