Carnivore Tracker, citizen science to protect the animals of Namibia

Carnivore Tracker is a clear example of how using citizen science can be as simple as pushing a button. In the present case it is about notifying the observations of the main carnivores present in Namibia, but it is an application whose concept can be extrapolated to other areas of the planet.

Its operation is extremely simple: 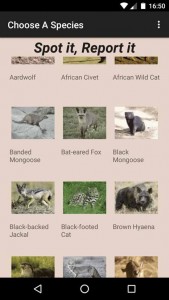 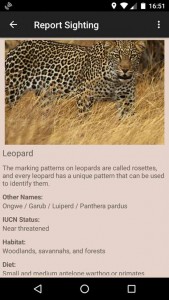 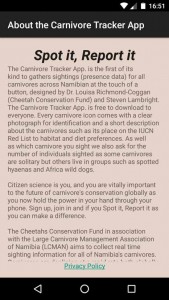 The apps for collecting wildlife sightings on continents such as Africa arouse certain misgivings because some of them are considered as threats to wildlife, since warn poachers of the presence of valuable catches that after are sold on the black market at astronomical prices (the kilo of rhinoceros horn, for example, reaches $60 000, according to a recent article published on CNET). In opinion of some responsibles, these applications are also linked with traffic problems in some natural areas such as the Kruger National Park in South Africa, where authorities are considering banning such applications due to the increase in accidents and abuses they are (allegedly) causing, not taking into account that many of the incidents are related to an inappropriate behavior in which sometimes falls the own staff of the park (an excessive speed, for example).

However, applications like Carnivore Tracker have as objective to provide data about the biodiversity of an area, taking care of publishing exact coordinates or great detaild about the location of different species. Carnivore Tracker does not stand out by its striking design, but it is an agile application that possibly fulfills with its purpose in a correct way (this aspect has not been proven for geographical reasons). Regarding the phone number requested when you open an account (at least in the version for Android), the designer team of the app ensures that it is a system to guarantee the observations that are made, never using this personal data for other purposes. As an aspect to improve, it would also be advisable to include some tips on behavior that should be observed during the use of the application, remembering some basic safety measures and rules to avoid nuisances to animals.

Previous Post
Do you need to create surveys and collect data in digital form? Test Conseris
Next Post
Your information searches now have double reward with Elliot For Water